Theatre review - 'I Found My Horn'

Last night I went to the ADC Cambridge to see the one-man show I Found My Horn based on the book of the same name by Jasper Rees. Third year Cambridge student Oskar McCarthy played the part of Rees who takes up the horn again after a 25 year gap. After discovering his horn in the attic Rees takes it along to a mass blow at the British Horn Society's annual event. Inspired by the fabulous sounds of the Hallelujiah Chorus for 70 horns, and fearing a mid-life crisis, he decides to set himself the challenge of playing a solo at the next British Horn Society event... without the other 69 players. Along with the horn was his student copy of Mozart's K447 (Horn Concerto No. 3 in E flat) and after seeking the advice of horn player Dave Lee ("my advice is don't do it") and numerous other big names he decides K447 will be the piece to perform. The play follows some of his adventures and highs and lows of learning the most difficult instrument in the orchestra. Of the highs and lows, there are many and they are extreme. McCarthy matched this extremeness in his portrayal which covered all the emotions and was very humerous. There was a lovely sketch of Mozart with horn player Leutgueb negotiating the exchange of the concerto for some cheese and an amusing account of what words might accompany the music at the start of the Romance. The play was a condensed version of the book but the production features much of the music and McCarthy actually plays the horn on stage showing the improvement from rusty re-starter to, well, I won't give the ending away in case you end up seeing it. Other issues covered include anxiety, approaches of different teachers, the school orchestra, transposing, match practise (or performance practise for the Americans) and ensemble / solo playing. There were plenty of horn sounds from concertos and symphonies in the recorded soundtrack and a few memorable quotes including "it takes balls of Sheffield steel to play the horn" from northerner Dave Lee. McCarthy is an accomplished horn player and was clearly in his element with the acting alongside the playing and all in all this was a great production. My initial grumble was that it was on at 11pm but it was well supported and worth staying out late for. Having taken up the other hardest instrument in the orchestra I naturally warmed to the story and much of the content was reflected in my own learning and challenges. Productions of the show appear to be few and far between but the book is a good alternative for now and highly recommended.
Posted by JustSteph at 04:13 No comments:

Today I received my final certificate for being an SIA Community Star! The covering letter from Elizabeth at Spinal Injuries Association confirmed that the amount raised in total through the Grade-1-a-thon was £85,000. My own individual total was £1226.52 so I'm pretty pleased with that! Elizabeth also drew our attention to a link where we can listen to the performances from the Clueless in Concert. As I write I can hear some beautiful glockenspiel playing, followed by a mis-hit and some audience laughter! Great fun! I can just about pick out the harps in Gymnopedie. For anyone who wants to hear the expressive and musical sound of 140 professional performers and teachers should try www.encoreplayer.co.uk, click on View Media Player and select GOAT Orchestra. Listen out for the harp gliss towards the end of the Tutti piece! 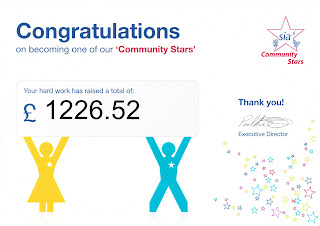 In a little extra publicity I had a short article about the event published in the May Journal for the Incorporated Society of Musicians. ISM is my professional body and 24 local members took part including Thanea and Maurice who were on the organising team. There are high professional standards set for entry but listening to the recordings I believe these have been well and truly smashed! Just have to hope the top brass don't get to hear it!
Posted by JustSteph at 09:27 1 comment:

The Old Windmill by Thomas Dunhill

Posted by JustSteph at 07:32 No comments: