I had planned to go for my grade 5 exam this term but with too much else going on I didn't get the pieces learnt so will go for it next term. I did manage to play it in a concert and provide background music for a charity ball so had plenty to work on.

The first event was a concert for a local village's Autumn Feast. Karen, a singer who lives in the next village, was asked if she could organise some musical entertainment so invited Margaret and myself to put on a short programme featuring mostly voice, clarinet and piano. As well as a few trios I was allowed to put in a harp piece and Karen also produced two pieces by Edmund Rubbra for voice and harp. Rubbra was born in 1901 in Northampton, which is also my home town, and died in 1986. Of the two pieces A Hymn to the Virgin was quite slow and worked on my lever harp as the changes were manageable. Karen was very easy to work with and her voice, which can be extremely powerful, was just right for this setting. Usually it takes a few run-throughs to get used to the other performer/s especially when it is a new combination but neither of us had anything particularly critical to say after the very first play-through. We'll hopefully do more in the future. The concert itself was fun and we had a lovely meal of shepherd's pie and apple crumble all made by the WI. We think it was a success but we'll know for sure next year if we get invited back!

The very next day I was back in Northampton as one of my oldest school friends, Gemma, had asked if I would like to provide some background music for a charity ball that she had organised. I said yes and set about preparing for it. I remembered from the Open Gardens day in June that I would need quite a lot of repertoire so went through all my books finding old tunes and new tunes that I could get to a reasonable standard in time. I had around 30 minutes of music and with breaks this stretches out to 45 minutes or 60 minutes if you slow pieces down and add repeats (there are all sorts of tricks). I played my first set in the bar and after a short break, at the start of the meal. I did feel nervous at first (very unlike me!) but as I settled down I got a bit more adventurous with the pieces I knew, playing a little faster or louder, to see what I could do. I also tried a piece that was still in progress but that didn't go so well so I imporivsed an ending and went back to my normal repertoire. Gemma thanked me with an enormous bunch of flowers and I was allowed to have my dinner! It was another super evening and it was great to see Gemma again. There are some photos but they've not quite made it to me yet. I'll post them when I get them.

Finally, the event I have been looking forward to for over a year... the ACE Foundation Playday with Catrin Finch! This took place in November and attracted around 60 harpists. After arriving and setting up Catrin was introduced and she gave a 30 minute recital.
I'll write this up properly when I find my notes but included a piece by Paul Patterson called The Mosquito from his 2003 suite Bugs.
We split into three groups led by Rohan, Elspeth and Helen, all harpists working full time as performers and teachers. I was in the Intermediate group with Elspeth and she got us warming up gradually getting us to play more fully and with stronger tones. Catrin popped in and gave us more advice before she headed off to another group. During the rbeak we were able to try out the harps, buy music and accessories, and talk to harpists from Pilgrim's and Morley's. After lunch we watched a masterclass with a young student. Hand and arm position featured heavily here and throughout the day so it was very useful seeing the instruction given and how it was, or wasn't in some cases, followed. The final session was led by Catrin who created an improvised piece with us playing various motifs underneath.
We played our rehearsed pieces in the final concert. Rohan had organised the music, harpists and timetable and had done a brilliant job. Trevor and Susannah from the ACE Foundation were on top form as ever (I've mentioned ACE days before) and I came home buzzing with new ideas.
Since then I have changed my warm up and at my last lesson just before Christmas Rohan had noticed an improvement in my technique. She then told me to work on changing another aspect so there's still a long way to go. Plans for 2013 include grade 5, the Cambridge Music Festival which this year will include a trio with Anne and Robyn and maybe another course or playday. There are some in Scotland and Cornwall that look good but for now it is back to work and normal life for a while. The blog will probably take a back seat now but I'll try and remember to update it every so often.
Posted by JustSteph at 10:24 No comments:

I realise the last post was back in August and since then rather a lot has happened so I'll use the last day of the year to write up a summary since then. I'd been a bit busy and the blog has taken a back seat.

Most importantly Chris and I got married in August. We had a super day which was filled with lots of laughter, cake, beer and of course - music. We got married at the local register office so as we were not there for long ceremony music was recorded and put onto CD. This meant I could play on all the tracks so started with Disney's I'm Wishing on the harp, then two pieces for clarinet and harp with Rohan as well as a tune from a computer game called Transport Tycoon for clarinet and piano with Margaret accompanying. We had fun making the recordings and this also allowed friends to relax on the day. Not so for Robyn as she very kindly agreed to play some background music during the drinks reception. 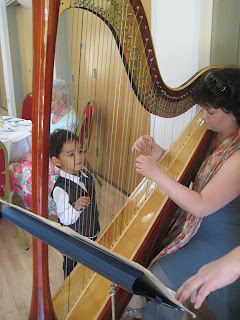 Not one for playing in public this was a new experience for her and friends and family said it was lovely. Rohan helped out with transport and support but Robyn was fine. Robyn has recently moved up to a pedal harp and had one on loan. 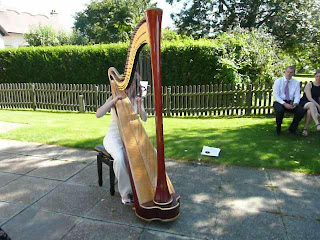 Walden Winds, a group that I coach, played at the start of the evening do then Mind The Gap, a rock band played for the rest of the evening. The highlight however was our version of the first dance where rather than dance we performed a duet. I've always felt that Chris had untapped musical talent despite never taking any opportunity to learn at school so I bought him a swanny whistle and after literally minutes of practise time we were ready. This is what happened! 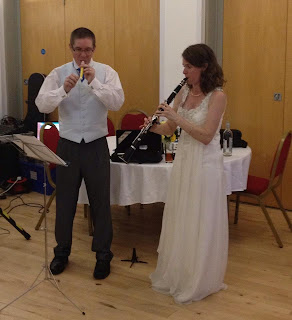 The second dance featured all the musicians playing The Muppets then Mind The Gap took over. It was a brilliant day and the weather was superb.

Just a few weeks later harpist Claire Jones got married to Chris Marshall. They went back to Wales and from the photos I have seen also had a fantastic day. I knew the dress would be good but it was stunning! It has been a very good year for Claire as her album Girl With the Golden Harp was released around the same time and did very well n the charts. I have a copy and it is a lovely collection. Chris composed one of the pieces and arranged most of the others. They have more planned for next year so they will no doubt be as busy as ever.

Posted by JustSteph at 09:31 No comments: