Sunday 28 July - Harp Ensemble Day
I had received details of a harp day from the Clarsach Society which was due to take place in Holt. Having been in Wales the previous few days I didn't know if I would feel up to this but as I had a drop Mum and Paul very early in Cambridge for their coach to whisk them away on holiday, and I had planned to be in Southwold on the Monday I decided to make a trip of it and have a couple of days in Norfolk and Suffolk, ooh arr. The playday had been organised by Lucinder Pennick with Danielle Perrett as lead tutor.

The day started very early with Mum and Paul arriving just before 6. We loaded them, their luggage, my harp and my luggage into the car and set off. After dropping them at Cambridge station it was a lovely clear run all the way to Norfolk. I arrived nice and early and the next car to arrive was a familiar silver estate. It was Rohan who had been asked to help out so it was great to see a familiar face. Robyn also arrived shortly afterwards and by 9am 17 harpists were getting set up, tuning and chatting. There was a nice mixture of pedal and lever harps and a couple of families where both were harpists. Mother and son in one case and grandmother and granddaughter in another. Lucinder had wondered if the 9am start time was too early but given the time it took to tune the harps and get everyone organised with music it was probably just right. Participants were a mixture of children and adults, some of whom were into retirement! Standards also varied from early grades through to 7 and 8.


Harps were arranged in a circle and Danielle led the first session which was working through 'Promenade' by jazz harpist and composer David Snell. Definitely worthy of more research as he sounds a very interesting character! The piece was lovely, and it didn't take long for the four parts to fall into place. Mid-morning break featured homemade cookies, always a winner! We continued with Promenade after the break and when we have managed a couple of successful run-throughs we moved onto an arrangmeent of the Dr. Who theme!

We had a picnic lunch then returned to playing and did a lovely arrangement by Danielle of Faure's In Paradium. My part had the melody which was harmonics all the way through. A harmonic is when you place the palm of your hand lightly against the string and pluck with the thumb. This halves the length of the string and the sound is not only an octave higher but has a softer ringing quality compared to the normal pitch an octave up. I aksed how to get the sound stronger as my harmonics work but are quite qeak. Danielle said the thumb needed to 'squeeze' the string before relersing and I found this did make a difference.

The next break featured homemade cake and the chance to buy music and harp related goodies while Danielle, Lucinder and Rohan arranged the harps into a more audience friendly position. Out of the 17 harpists only two others had been on the ACE Foundations' harp day back in November so it was good to get to meet lots of other players. Holt may be a good 80 miles away but the Anglia region can feel quite small and it is suprising how many there are out there who share the interest of playing the harp. We had a run through of our pieces, rearranged ourselves and got ready for the concert at 5pm. 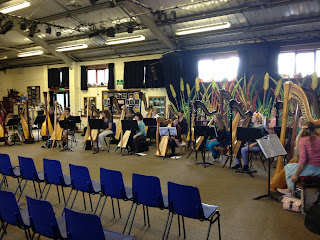 Danielle led the performance from her harp and it all went very well. After seeking permission I was allowed to set my little recording device up and captured the performance so will send that out when I've downloaded it.

It was a lovely day and thanks to Lucinder for organising the day and to Danielle for leading and Rohan for her help and sense of humour!